Give us a call!

4-Way Inspection Services’ factory trained technicians have been installing, commissioning, testing, calibrating, and replacing various fixed gas detection systems for various applications in and around the Edmonton region as well as throughout all of Alberta, BC, Saskatchewan and the Northwest Territories since inception. We service all makes and models of fixed gas detection equipment out on the market today such as Honeywell, Armstrong, Critical Environment Technologies, QEL, Opera, AirTest, Greystone, Veris Industries and more.

Life safety as well as energy efficiency are the main reasons for maintaining these gas detection systems. Frequent calibrations as well as regular maintenance both play an important roll to ensure optimal performance of the gas detection system. Every manufacturer has their own calibration frequency and 4-Way Inspection Services can advise you as to how frequent your specific equipment needs to be calibrated. You may be surprised that your system is being calibrated more frequently then needed resulting in higher unnecessary costs.

Different types of gas sensors have different ranges of life expectancy. Over time, these sensors begin to “drift” becoming less accurate and creating a safety concern. They can “drift” and result in the sensor being less sensitive which results in the ventilation system not starting when it should. This creates a dangerous environment as high levels of gas may be present without even knowing. The alternative is that the sensors can “drift” becoming more sensitive resulting in the ventilation equipment starting up too soon and too frequently. This results in higher energy costs and wear on the associated ventilation equipment. Calibrating the sensors to that optimal level eliminates both scenarios and ensures the equipment is running efficiently as per the manufacturers specifications.

Ensuring that your system is running correctly and efficiently results in significant cost savings. For example, a gas detection system can control a parkade’s ventilation system. When a pre-set gas concentration is reached, the ventilation system activates which in turn exhausts the contaminated air and brings in fresh air to replace it. The cost to run these fans can accumulate quickly. In the winter season, the cost to run this system significantly increases as the warm air that is being removed from the parkade is being replaced with cold fresh air which needs to be heated up by the make-up air unit. By ensuring that your system is running correctly, less frequent ventilation system start-ups will provide a substantial savings on energy costs. Reduced wear on the various ventilation equipment such as the motors and fans is also a benefit to less frequent start ups as it is hard on the equipment every time the system is activated. 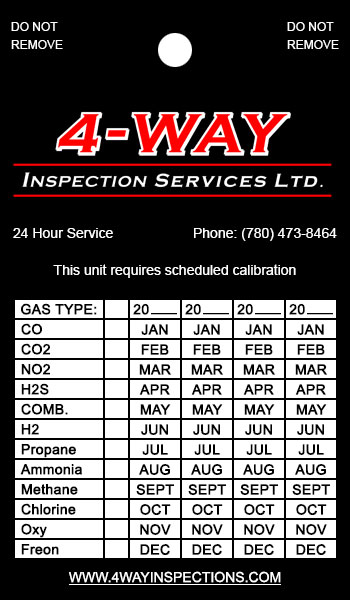 How Can I View The Results From The Calibration?

At the completion of the calibration, 4-Way Inspection Services will apply certification tags on each piece of equipment associated to the gas detection system as well as issue a comprehensive report to the customer. In this report, details pertaining to the performance of each individual sensor and controller will include:

We will also provide recommendations that result from the calibration in order to repair any equipment which is not performing to the manufacturers specifications.

Finally, 4-Way Inspection Services will document and track your specific gas detection system testing interval and contact you when the next calibration is due. This will eliminate the risk of not being in compliance by missing calibration intervals.

There are several different applications in which gas detection services are needed and they are as follows:

(Please select any of the following services for further information)

For further information or to schedule any of our inspection / testing services,
please call our inspection department 24 hours a day at (780) 473-8464